A Bend in the Road By Nicholas Sparks

Miles Ryan’s life seemed to end the day his wife was killed in a hit-and-run accident two years ago. As deputy sheriff of New Bern, North Carolina, he not only grieves for her and worries about their young son Jonah but longs to bring the unknown driver to justice. Then Miles meets Sarah Andrews, Jonah’s second-grade teacher. A young woman recovering from a difficult divorce, Sarah moved to New Bern hoping to start over. Tentatively, Miles and Sarah reach out to each other…soon they are falling in love. But what neither realizes is that they are also bound together by a shocking secret, one that will force them to reexamine everything they believe in-including their love. 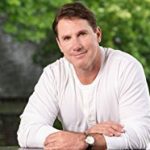 With over 100 million copies of his books sold, Nicholas Sparks is one of the world’s most beloved storytellers. His novels include fourteen #1 New York Times bestsellers, and all of his books, including Three Weeks with My Brother, the memoir he wrote with his brother, Micah, have been New York Times and international bestsellers, and were translated into more than fifty languages. Eleven of Nicholas Sparks’s novels–The Choice, The Longest Ride, The Best of Me, Safe Haven, The Lucky One, The Last Song, Dear John, Nights in Rodanthe, The Notebook, A Walk to Remember, and Message in a Bottle–have been adapted into major motion pictures.

A Bend in the Road By Nicholas Sparks