Half Girlfriend By Chetan Bhagat

Report an abuse for product Half Girlfriend By Chetan Bhagat

A romance novel for the young adults, Half Girlfriend is a story that has been set in different locations including Bihar, Delhi and New York; it revolves around a boy who comes from Bihar in India and his deep longing to dazzle out the girl he is in love with.

According to the author, the book is meant for the “non-English-types” and reveals the utter dissatisfaction and language problems a young man from Bihar, who speaks Bhojpuri and knows little about the ways of big cities, had to wade through as he got admitted at St. Stephen’s College in the national capital, a place that signified sophistication. He falls for a rich, smart and high-class girl from the city. Although the girl never fully accepts this relationship, she nevertheless gives a nod to be his “half girlfriend”. 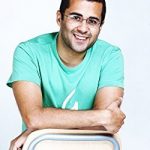 Chetan Bhagat published his first novel first novel ‘Five Point Someone’ in 2004 and this very first venture took him to the peaks of fame and popularity. The book depicted the story of an IIT student who considers himself to be below average than all the other students in IIT. This book won the Society Young Achiever’s Award and Publisher’s Recognition Award. The story was adopted into a film directed by Rajkumar Hirani and starred famous Bollywood stars like Aamir Khan, Madhavan, Sharman Joshi and Kareena Kapoor. His second book was ‘One Night At A Call Center’ and this too was a great success. This book was made into a movie and was named ‘Hello’ and Chetan himself wrote the script. The movie was noted by the special appearance of Bollywood star Salman Khan and was an average hit. His next novel has cricket as the major theme. It is named ‘Three Mistakes of My Life’. His fourth book is named ‘Two States

Half Girlfriend By Chetan Bhagat