Shikwa and Jawab-e-Shikwa are Urdu language poems written by Muhammad Iqbal, which were later published in his book Kulliat-e-Iqbal. The poems are often noted for their musicality, poetical beauty and depth of thought 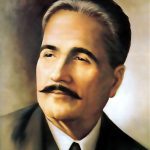 Muhammad Iqbal was born on 9 November 1877. His father was Sheikh Noor Muhammad[2], who worked in a small government job but later started his own business, and his mother was Imam Bibi. Both Allama Iqbal’s mother and father were very pious and religious-minded people and devoted to a simple life. After early Islamic education and then secondary at a small school in Sialkot, Iqbal was admitted to the Scottish Murray College, Sialkot, where he topped the higher secondary examinations and got a scholarship to study at the famous Government College, Lahore, for BA. On going to live in the hostel there, Iqbal met Professor Arnold, an English teacher who taught many things to Iqbal and guided him in his studies of philosophy and literature.He was very young at that time.