Dastan Iman Faroshon Ki (Tales of the Traitors) by Inayatullah Altamash is series of stories about Sultan Salahuddin Ayubi (known as Saladin in Western World) who fought bravely against the Crusades (series of religious expeditionary wars blessed by the Pope and the Catholic Church, with the stated goal of restoring Christian access to the holy places in and near Jerusalem), imposed on Muslim Ummah by Christians and European Countries. Salahuddin Ayubi was the person who for twenty years braved the storm of the Crusaders and ultimately pushed back the combined forces of Europe which had come to Swarm the Holy Land. Crusaders realized that they cannot win in battlefields, so they woven up many conspiracies against Salahuddin and his Army, using Bribe, Women and Assassins. Salahuddin Ayubi had to fight the Crusaders in the battles as well as crush conspiracies withtin his Army, Companions and Allies. 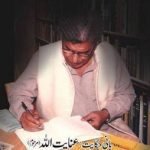 Inayat Ullah is a famous journalist, columnist, war freelancer, novelist and story writer. He served Urdu with more than one hundred books.

On his coming to Pakistan, Inayat Ullah joined the Pakistan Air Force as a corporal. He was the part of the first group of Pakistan Air Force, who saluted the Quaid-E-Azam Muhammad Ali Jinnah (Father of the nation) on his arrival at Peshawar airport.

In 1965, the war started between Pakistan and India. Now the time started for Inayat Ullah. His spirit of a soldier took him on the borders. He took the pen as a weapon and became a war correspondent. Inayat Ullah was the only one war correspondent who was an eye witness of the war. He met the soldiers and to listen to the stories about the bravery of martyred. Regarding stories and event of 1965 war, Inayat Ullah also wrote some books.

In his career as a journalist, Inayat Ullah appointed as an editor of monthly Sayyara digest. He increased the publishing of the digest. Later, he established his publishing house named “Maktaba Dastan.” Inayat Ullah published a monthly magazine “Hikayat” which became one of the most published journals of Urdu. In these days, Inayat Ullah attracted to the historical novels writing. He wrote some popular historical novels. He also wrote on the topic of hunting stories, investigation, psychology, biographies, politics and social evils. He wrote more than one hundred books and hundreds of editorials. Inayat Ullah used many pen names as a writer like Meem Alf, Iltumsh, Ahmad Yar Khan, Sabir Hussain Rajput, Waqas, Mehdi Khan, Gumnam Khatoon and Inayat Ullah.

As a writer and journalist, Inayat Ullah established his identity. His patronage trained many authors (like Tariq Ismail Sagar) and played a significant role in the promotion of Urdu novels. He was also an asset of Urdu journalism, but he has no value in the circle of Urdu writers. Inayat Ullah disliked the most of the famous journalist and columnist of Urdu due to their preferences. It is the cause that a memorable writer is unable to remember the lines of columns, editorial or in seminars and other literary events.