For a Pashtun, the world is a dangerous place. . . . To negotiate such a world, a man or woman needs wise words. . . . Pashto proverbs provide critical lessons about faith and honor, human nature and relationships, friends and enemies, power and revenge, in short, how to live in a society that is at once fragrant with friendship, fraught with ambiguities, and seared by treachery.” You are invited to look into the world of the Pashtun through the pages of Rohi Mataluna: Pashto Proverbs. This selection of 1,350 Pashto proverbs (mataluna) from the mountainous (rohi) Afghan borderlands, with English translation and cultural annotations, aims to preserve some of the original flavor of an oral literature that reflects a traditional culture now facing turmoil and inevitable change. This second edition has been completely updated, revised, and expanded with new material, while taking care to preserve and honor the original work of the first edition. It includes: — Cultural background and context of the Afghan frontier — Explanations of key words and concepts — Examples of the use of texts in social situations — Observations on the form and structure of proverbs — Parallel and variant texts — Background stories — Index of key words, persons, and places This book will appeal to readers and students of Pashto and English, to scholars and tourists, to anthropologists and folklorists, and to all those interested in learning more about the Pashtun people of the Afghan frontier.

— Cultural background and context of the Afghan frontier
— Explanations of key words and concepts
— Examples of the use of texts in social situations
— Observations on the form and structure of proverbs
— Parallel and variant texts
— Background stories
— Index of key words, persons, and places 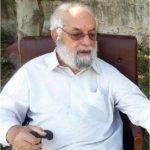 He left behind two sons and five daughters. He was author of over 100 books. He was laid to rest at his ancestral graveyard. A large number of poets, writers, research scholars attended his funeral prayers.

Scholars and writers from Afghanistan, Quetta, Fata and parts of Khyber Pakhtunkhwa condoled the death of Prof Nawaz Tair and termed it an irreparable loss for Pashto language and literature.

Prof Nawaz Tair was considered an authority on history, classical literature and Pashto folklore. He joined Pashto Academy, University of Peshawar in 1957 as a junior research officer. He remained director of Pashto Academy from 1989 to 1995.

He was an accomplished Pashto poet, critic, historian, translator, research scholar and folklorist. He penned down over100 books including ‘Zhwand Au Tapa’, ‘Rohi Mataloona’, Pashto translation of the Holy Quran and a comparative study of Saddar Khattak’s ‘Adam Khan Durkhani’ and Shakespeare’s play ‘Romeo and Juliet’.