Pakistan Beyond the Crisis State Edited by Maleeha Lodhi

Pakistan’s diversity and resilience have rarely figured in the single-issue focus of recent literature on the country. This book presents an alternate paradigm and a deeper understanding of the country’s dynamics through an analysis of the Pakistan’s political, economic, social, foreign policy and governance challenges. It also discusses the complex interplay between domestic developments and external factors including great power interests that are so central to the Pakistan story and explain the vicissitudes in its fortunes. ‘An excellent book, one that brings out some very important points about the surprising stability of the country beneath the alarmism of the daily headlines, and forms a useful antidote to the general perception about Pakistan in the West.’ Professor Anatol Lieven, King’s College, London ‘This timely study looks beyond the headlines of terrorism and natural disaster that dominate Western perceptions of Pakistan. The contributors argue that contemporary security challenges and longer-term demographic pressures and energy shortages can be overcome if Pakistan possesses the political will to undergo wide-ranging institutional, educational and structural economic reform.’ Professor Ian Talbot, author, Pakistan: A Modern History 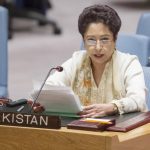 Dr Maleeha Lodhi is Pakistan’s Ambassador and Permanent Representative to the United Nations in New York. She twice served as Pakistan’s Ambassador to the US (1993 – 1996, 1999 – 2002) and as High Commissioner to Britain (2003 – 2008) Until recently she was the special adviser for international affairs to Pakistan’s largest media conglomerate, the Jang/Geo Group She also served as a member of the UN Secretary General’s Advisory Board on Disarmament Affairs from 2001 to 2005. She was the first woman in all of Asia to become the editor of a national daily newspaper. In 1994 Time magazine nominated her as one of a hundred people in the world who will help shape the 21st century, the only one from Pakistan.

She is the recipient of the President’s award of Hilal-e-Imtiaz for Public Service in Pakistan. Lodhi also received an Honorary Fellowship from the London School of Economics in 2004 and an Honorary Degree of Doctor of Letters from London’s Metropolitan University in 2005. Dr Lodhi was the founding editor of Pakistan’s leading English daily, The News. She taught Politics and Political Sociology at the London School of Economics and Political Science from 1980-85. She has also taught at Quaid e Azam University in Islamabad.

She is the author of two books: Pakistan’s Encounter with Democracy and The External Challenge. Her latest book, an edited volume titled Pakistan: Beyond the ‘Crisis State,’ was published in 2011 by C Hurst, Columbia University Press and Oxford University Press. It has gone into its fifth edition.

Pakistan Beyond the Crisis State Edited by Maleeha Lodhi