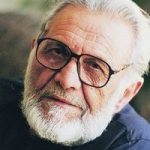 Ashfaq Ahmed (Urdu: اشفاق احمد‎) was a writer, playwright and broadcaster from Pakistan. He authored several books in Urdu. His works included novels, short stories and plays for television and radio. He was awarded President’s Pride of Performance and Sitara-i-Imtiaz for meritorious services in the field of literature and broadcasting.

After Partition, when Ahmed arrived at the Walton refugee camp with millions of other migrants, he used to make announcements on a megaphone around the clock. Later, he got a job in Radio Azad Kashmir, which was established on a truck that used to drive around in various parts of Kashmir. He then got lectureship at Dayal Singh College, Lahore for two years. Whereafter, he went to Rome to join Radio Rome as an Urdu newscaster. He also used to teach Urdu at Rome university. During his stay in Europe, he received diplomas in the Italian and French languages from the University of Rome and University of Grenoble, France. He also earned a special training diploma in radio broadcasting from New York University.

He started writing stories in his childhood, which were published in Phool [Flower] magazine. After returning to Pakistan from Europe, he took out his own monthly literary magazine, Dastaango [Story Teller], and joined Radio Pakistan as a script writer. He was made editor of the popular Urdu weekly, Lail-o-Nahar [Day and Night], in place of famous poet Sufi Ghulam Mustafa Tabassum by the Government of Pakistan.

In 1962, Ahmed started his popular radio program, Talqeen Shah [The Preacher] which made him immensely popular among the people in towns and villages.[13] He was appointed director of the Markazi Urdu Board in 1966, which was later renamed as Urdu Science Board, a post he held for 29 years. He remained with the board until 1979.

Ahmed, in his later years of life, was greatly inclined towards Sufism. His close association with Qudrat Ullah Shahab and Mumtaz Mufti was also attributed to this tendency. He used to appear in a get together with his fans in PTV program Baittakh (The Guest Room) and Zaviya (The Dimension) where he gave swift but satisfying responses to each and every question posed by the youth audience.
On 7 September 2004, Ashfaq Ahmed died of pancreatic cancer. He was laid to rest in a Model Town, Lahore