How the World Works By Noam Chomsky

With exceptional clarity and power of argument, Noam Chomsky lays bare as no one else can the realities of contemporary geopolitics. Divided into four sections, originally published in the US only as individual short books, collectively selling over half a million copies, How the World Works covers: What Uncle Sam Really Wants: the main goals of US foreign policy; the devastation caused abroad; the brainwashing at home The Prosperous Few and the Restless Many: the new global economy; food and Third World ‘economic miracles’; the roots of racism Secrets, Lies and Democracy: the US, the CIA, religious fundamentalism; global inequality; the coming eco-catastrophe 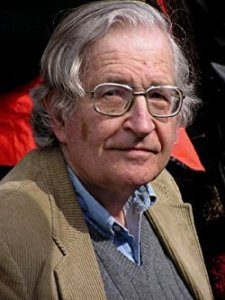 Avram Noam Chomsky born December 7, 1928) is an American linguist, philosopher, cognitive scientist, historian, logician, social critic, and political activist. Sometimes described as “the father of modern linguistics”, Chomsky is also a major figure in analytic philosophy, and one of the founders of the field of cognitive science. He has spent more than half a century at the Massachusetts Institute of Technology (MIT), where he is Institute Professor Emeritus, and is the author of over 100 books on topics such as linguistics, war, politics, and mass media. Ideologically, he aligns with anarcho-syndicalism and libertarian socialism.

How the World Works By Noam Chomsky