The best of Mirza Ghalib, one of the greatest Urdu poets, is presented in this compendium. Each of the 104 ghazals, 7 miscellaneous nazms, and 68 selected letters are presented in the original Urdu text, with a parallel translation in simple, lucid English, and a transliteration in Roman script for readers who are not familiar with Urdu in Persian script. A critical introduction to Ghalib’s work, chronology of important events in his life, and bibliography are also provided 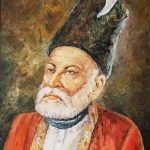 During his lifetime the Mughals were eclipsed and finally deposed by the British following the defeat of the Indian Revolt of 1857, events that he wrote of. Most notably, he wrote several ghazals during his life, which have since been interpreted and sung in many different ways by different people. In South Asia, he is considered to be one of the most popular and influential poets of the Urdu language. Ghalib today remains popular not only in India and Pakistan but also amongst diaspora communities around the world.